Tamara Thomsen works as a Maritime Archaeologist for Wisconsin Historical Society's Maritime Preservation and Archaeology program. Her work has resulted in thirty-five Great Lakes shipwrecks being added to the National Register of Historic Places. In 2013 she was awarded the Association for Great Lakes Maritime History's Joyce S. Hayward Award for Historic Interpretation, and has received the Special Recognition Award (now the C.P. Labadie Award) from the Great Lakes Shipwreck Preservation Society. Outside of her own work she has participated as a photographer, researcher, and research diver on projects ranging from work with NOAA on the USS Monitor and Woods Hole Oceanographic Institution on the RMS Titanic, to biological and cultural underwater cave surveys for Texas A&M University, University of California- Berkeley and the Smithsonian Institution. She is a veteran diver with over 20 years of experience. She founded and owns Diversions Scuba in Madison, Wisconsin where she continues to teach a full range of technical diving courses specializing in mixed gas, rebreather and cave diving.

John Janzen is a rebreather and technical diving instructor who has been diving the Great Lakes for 25 years. He has made many notable accomplishments such as the first dives on the stern of the Carl D. Bradley (370 feet), the first entry of the Bradley's engine room and he holds penetration records in submerged tunnels of regional copper and lead mines. In 2007, he and John Scoles recovered the Bradley's bell, which was the deepest artifact recovery ever performed in the great lakes by autonomous divers. The story is told in the Emmy award-winning documentary November Requiem. John has worked as a diver and videographer for National Geographic, NOAA, Wood’s Hole Oceanographic Institution, Michigan State Police, U.S. Coast Guard and The History Channel. Most recently, his videography has been featured in the Great Lake Warriors TV series.

John has written for Wreck Diving and Advanced Diver Magazines, published the Diver's Guide to Lake Wazee and wrote the factory service manual for the Inspiration rebreather. He holds a B.S. degree in Chemistry and is a certified machinist. He works professionally as an Engineer in the defense industry, where he has contributed to many programs including Cray supercomputers, NASA, Navy Research Laboratory, National Missile Defense, DARPA and most recently, in the field of explosives chemistry. 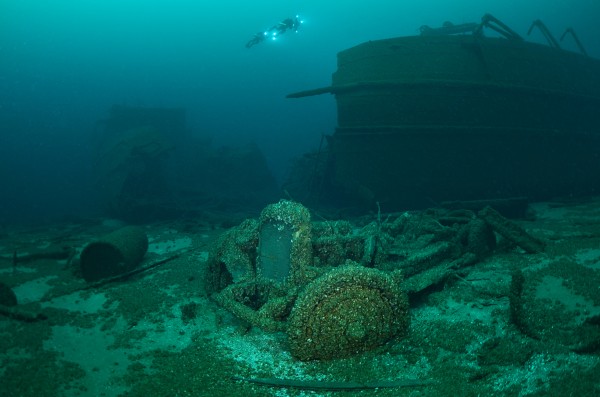 On 3 December 1924, the steamer Lakeland sank in Lake Michigan under mysterious and suspicious circumstances. At 280 feet long, she was a large and seaworthy vessel, capable of carrying massive cargoes, but she sank in the calmest of weather, while carrying only 22 automobiles, less than 10% of her cargo capacity.

In 1925, an investigation conducted under hazardous conditions by hard hat divers found no incriminatory evidence, but it did little to dispel suspicions of fraud and foul play.

In 2013 the first comprehensive archeological survey of the Lakeland was conducted by the Wisconsin Historical Society, in attempt to clear the shroud of mystery that still envelops her loss.

Join Tamara Thomsen and John Janzen for an in depth look at the Lakeland’s loss and a tour of the wreck as she appears today. See photos and video of places aboard the Lakeland never before accessed by divers.