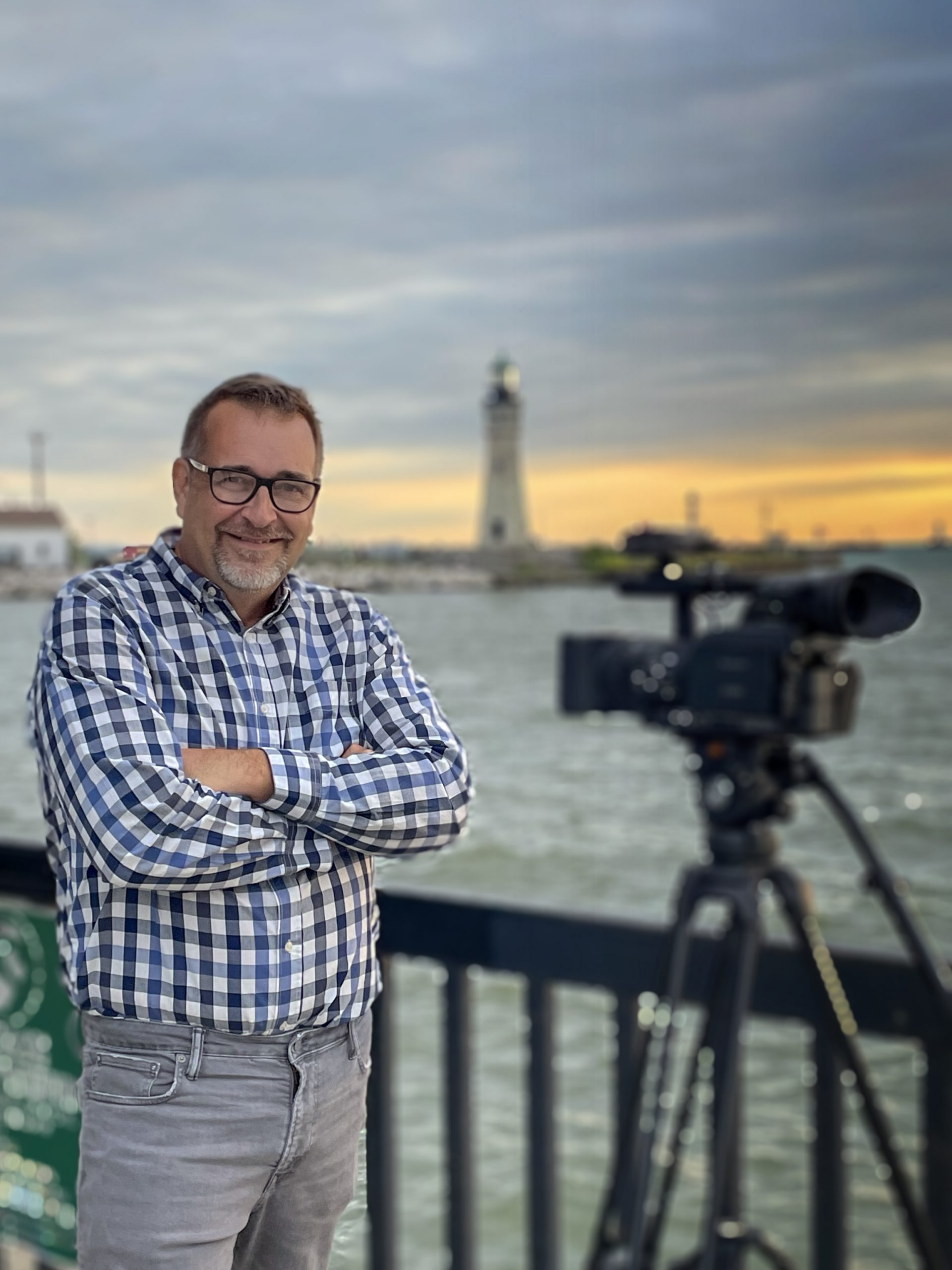 With dozens of appearances in two countries and three states last year, Ric Mixter is certainly one of the busiest maritime speakers, rumored to be the most requested historian on the Great Lakes. Visiting museums, libraries, NASA and his live music concert “STORM”, thousands of audience members get a new appreciation for our unique inland-sea history through his spellbinding lectures. Millions of television viewers recognize Ric Mixter as a shipwreck researcher, diving over 100 shipwrecks in the Great Lakes, including the Edmund Fitzgerald. He has produced over 30 programs for PBS and the Outdoor Channel, and appeared as a shipwreck expert on the History and Discovery Channels. He leads the pack when it comes to sharing our unique underwater resources with the general public, and thousands of dive show patrons and countless school kids know him as the energetic story teller who uses video like no other presenter can. Ric’s stories appear in books, magazines (including Michigan History Magazine) and in radio and TV news programs. Mixter’s YouTube videos have over 3 million views, covering shipwrecks in four of the Great Lakes and adventures in several foreign lands. Ric started diving in 1991, and served as SCUBA cameraman on underwater expeditions to the Great Lakes largest shipwrecks, the Edmund Fitzgerald and Carl D. Bradley. He has interviewed dozens of shipwreck survivors over the past 15 years, including two from the 1913 Storm, two from the 1940 Armistice Day Storm and survivors from the largest shipwrecks in lakes Michigan, Huron and Erie. With over 20 years of stories on historical preservation, Ric was awarded the 2009 Award for Historic Interpretation by the Association for Great Lakes Maritime Historians. In 2011 he was elected to their board of directors. Ric was also the Great Lakes Lighthouse Keepers Association’s third president. He has hosted the largest dive show in Ontario and also MC’d the midwest’s largest show in Chicago. He was a frequent speaker at Ghost Ships in Milwaukee and Michigan’s largest show “Great Lakes Shipwrecks”, held annually in Ann Arbor. Ric is also a pilot- flying not only single engine planes, but also has flight time in several military jets. These include the US Air Force’s Thunderbird F-16 Falcon, and over 100 hours of camera work in the B-52 Stratofortress. He’s flown in the Goodyear Blimp and countless biplanes and aerobatic aircraft and has also jumped several times from over 12,000 feet as a skydiver. Ric also adept to filming in helicopters, from flying over the jungles of Honduras with the Army, to being lowered in a rescue basket into Lake Huron by the Coast Guard. Historical Documentaries: Sunken Treasure 2012 Offshore Outposts 2011 Cement Boat 2009 Bombs Away 2008 Cutter Rescues 2006 Final Run: Storms of the Century 2005 Safe Ashore: The 1940 Armistice Day Storm 2004 Great Lakes In Depth (26 episodes on PBS and the Outdoor Channel) 2000-2001 Deep Six: Titanics of the Great Lakes 1998 The Edmund Fitzgerald Investigations 1997 Expedition ’94 to the Edmund Fitzgerald 1995 Best Adventure Yet 1993 Books & Periodicals “Bottled Goodbyes” 200 page book printed 2020 “The Wheelsmen” 300 page book reprinted 2015 “Nordmeer” Michigan History Magazine 2015 “McDougal’s Dream” Michigan History Magazine 2013 “Bombs Away” Winter 2011 “Shipwrecks of Saginaw Bay” Michigan History Magazine July 2014 “Voices of the Lakes” article in book 1993

Bottled messages have been discovered on shore nearly as long as glass containers have
been invented. They bring tidings from ocean voyagers, invitations for pen-pals, tragic
attempts for rescue and floating farewells from long lost souls.
Based on Ric Mixter’s new book, Bottled Goodbyes chronicles the most famous messages
ever recovered, including three bottles found after the Titanic disaster. One of those messages
was allegedly from a White House aide who served two U.S. presidents!
Ric also investigates five messages that floated ashore from the Great Storm of 1913 and
shares in-depth information on the barge Plymouth and Lightship 82 notes. Both ships were
lost with their entire crews, so the messages recovered made national headlines.
Each of the Great Lakes are highlighted, making this a lecture that can be shared anywhere on
the inland seas. Of particular interest are the near crashes of Balloonist Washington Donaldson
in lakes Ontario and Michigan and the final flight that took his life off the Michigan coast in
1875.
Ric also investigates the development of radio on the Great Lakes and how that led to a
decrease in bottles recovered. The rescue of the Pere Marquette 18 Carferry is specifically
highlighted as an example. That ship was discovered in the summer of 2020 in 500 feet of
water off the coast of Wisconsin.