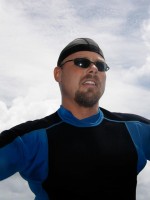 Mr. Michael Tougas has been a photographer for over 25 years. He became a certified diver in 1997 and started Trimix diving in 2001. In 2004 Michael acquired a captain’s license, sold his possessions and sailed his boat “Sabbatical” solo from Lake Superior to the Florida Keys. Upon arriving in the Keys he became a certified dive instructor and took a job as the Captain of Ocean Hunter II, Palau. From there he worked as the Captain onboard the Sundancer II, Belize as well as the Captain on the Wind Dancer, Grenada and the Star Dancer, Papua New Guinea. Michael’s journey has taken him to the far corners of the Earth and back again. Along the way he has met some amazing people and cataloged thousands of “Once in a Life Time” images. He is a 1600 Ton Master, Professional Photographer, Advanced Trimix Diver, and a Certified Dive Instructor. Michael will share his experiences and the photographs that define them