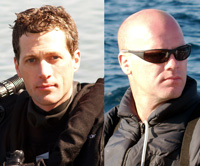 John Janzen is an Inspiration rebreather instructor who has been diving the Great Lakes for more than 20 years. His special interest lies in the deepest shipwrecks of the great lakes and he has made many noteworthy accomplishments such as the first dives on the stern of the Carl D. Bradley (370 feet) the first dives on the L.R. Doty (310 feet) and the first penetration of the Bradley's engine room with Tracy Xelowski. In 2007, Janzen and John Scoles recovered the Bradley's bell. The story is told in the Emmy award-winning documentary November Requiem. John has also worked as a diver and videographer for National Geographic and was featured in the recent Nat Geo Explorer episode Ghost Ships of the Great Lakes. John has written for Wreck Diving and Advanced Diver Magazines, he published the Diver's Guide to Lake Wazee and wrote the factory service manual for the Inspiration rebreather. He holds a degree in Chemistry and is also a certified Machinist. John works professionally as an Engineer in the defense industry, where he has contributed to many programs including Cray supercomputers, NASA, Navy Research Laboratory, and most recently, is working in explosives chemistry for a large ammunition manufacturer. Johns Scoles has been diving for more than 23 years and has a number of unique accomplishments including the first dives on the stern of the Carl D. Bradley (370 feet) and the first dives on the Robert C. Pringle (305 feet) and L. R. Doty (310 feet). John has been an underwater videographer for more than a decade, with the goal of bringing images of the Great Lakes’ deepest shipwrecks to people who cannot venture there themselves. John and his videography were featured on the 2011 Nat Geo documentary Ghost Ships of the Great Lakes. Scoles and his diving partner John Janzen recovered the bell from the Carl D. Bradley shipwreck for a memorial in 2007, which was the deepest non-commercial diver artifact recovery ever performed in the Great Lakes. Scoles was a pioneer in the development and use of electrically heated drysuits, enabling long decompression dives in cold water. He has appeared in numerous magazine, newspaper and television articles and in the Emmy award winning documentary November Requiem. He is a native of Minnesota and works in the electrical industry. Diving together since 1999, perhaps no pair of divers has accomplished more in terms of novel videography of deep great lakes shipwrecks than Scoles and Janzen. They are known well within the great lakes diving community as “the Johns”.

Eight years of diving on the Carl D. Bradley

John Janzen and John Scoles were the first divers to reach the stern of the Bradley in 2004. They now each have more than 30 dives on the Bradley and have logged more bottom time on the wreck than any other divers. During this time, they have made important historical discoveries, developed specialized equipment and techniques for deep cold water dives, recovered the Bradley’s bell for a crew’s memorial and recently their team has accomplished the only penetrations into the Bradley’s magnificent engine room. John and John will discuss their experiences during eight years of diving the Bradley, their challenges and successes, the incredible emotion of meeting families of the lost crew and they will show rare and stunning high definition video footage of the Bradley.