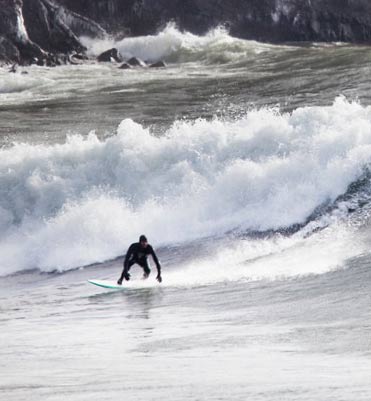 Bob is originally from the island of Oahu in Hawaii, and has been living in Minnesota since 1988. During his youth in Hawaii, Bob became an avid surfer and he never lost his love for surfing even when a career opportunity carried him far away from any ocean. Though living in the Minnesota for many years, it is only since 1998 that he began his adventure to conquer surfing on Lake Superior. The story of the Lake Superior Surf Club has been covered by numerous media, including: M • Minneapolis Star Tribune • Minnesota Monthly Magazine • Local Minnesota TV news affiliates of ABC, CBS, and NBC • Appearance in “Unsalted”, a movie about great lakes surfer Vince Duer • Selected as exclusive local surf guide for Jamie Sterling and Red Bull for surfing exploration of Lake Superior. For more information, Bob can be contacted at the website: superiorsurfclub.com or by email: bob@superiorsurfclub.com or bob@bobtema.com

Surfing is relatively new in popularity to Lake Superior, however, Bob Tema has been exploring its vast potential for over 10 years. There were only a few guys in the water in the late 1990’s when Bob began surfing Lake Superior. Over the years the Lake Superior surfing scene has grown to about 50 active surfers – just in the Duluth area alone. In 1999 Bob started the website, Superiorsurfclub.com and the surf club has experienced many visitors, both virtually and out in the water! Now the surf club has watched other areas of the lake “catch the wave” and grow small communities of surfers. These new surfing communities can be found in places such as Marquette MI, Thunder Bay and Ontario, Canada. Please join in the fun as Bob shows us how to “hang ten” on the Great Lakes.