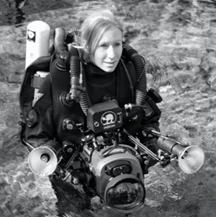 Becky is a professional underwater videographer, photographer, 3D cameraman, and technical diver. She is an award winning Photojournalist that has worked for major news networks including CBS and Fox News, shooting video in all types of situations from major hurricanes to the Presidential Election.

She has over 17 years of dive experience logging thousands of hours underwater in various conditions and extreme environments past 350feet. She holds certifications in Cave diving, Trimix, Rescue, and several Rebreathers. As a cameraman her projects have taken her all over the globe from documenting historic wrecks in Truk Lagoon, Japan and the Great Lakes, to capturing stunning video of marine life including Humpback Whales, Wild Dolphins and Great White sharks..cageless!

Becky has photographed cave systems worldwide and participated in several exploration projects. For the past 3 years she has worked closely with Woods Hole Oceanographic Institution’s Advanced Imaging and Visualization Laboratory using the latest in HD and 3D technology. With them she’s participated in many exciting projects with the National Park Service and NOAA. Projects include documenting famous wrecks including the USS Monitor, the U-869 and the 2010 Titanic Expedition. Other clients include National Geographic, The Military channel, Discovery Science, NBC, CBS, FOX and Current TV.

Becky was an underwater cameraman and talent on the TV series Quest for Sunken Warships airing on Discovery science. Her underwater photography and articles have been published in numerous dive magazines. She holds a Bachelors degree from the University of Tampa in Journalism with a minor in Biology. Not even 30 and she has won an Emmy Award and an Edward R. Murrow Award along with several high profile photo contests including National Geographic Traveler in 2011.

Becky feels fortunate to be able to combine her two passions in life, photography and diving. She also believes in conservation through education, and there is no better way to educate & inspire someone about the underwater world than through compelling imagery and documentaries. “I really love and respect our oceans and want to see them protected for the future. Caves, sharks, wrecks, whales its all magical and to be a part of that world for a moment, then to share it with the public is the true treasure.”

Join Becky as she takes you on a tour of the underwater world – from the caves of Domincan Republic to the hydrothermal vents of the Eastern Pacific – you will see it all first hand. Famous shipwrecks like Titanic, Britannic, the incredibly pristine wrecks of Isle Royale – even wrecks in Lake Michigan and Huron will be explored. This video was shot by Evan Kovacs and Becky Kagan and will be presented by Becky at our show. This will be one-of-a-kind show that has never been seen before. 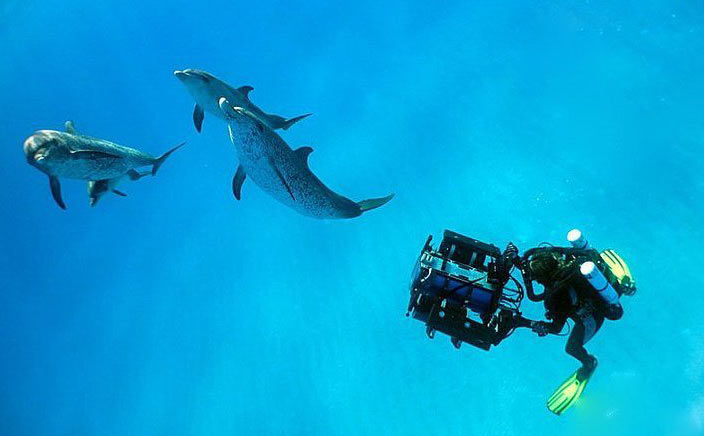